The pilot prototype of this use case consists of 3 components in order to provide a collaborative VR training module for mobile HMD users which exploits the ACCORDION platform. Τhe OVR application is redesigned to enable the migration of certain application components in the ACCORDION minicloud. For offloading the “full” computation offloading option is favored, where the whole computing part of the application is offloaded leaving the mobile device only responsible for input/output. This approach is preferable against task offloading, namely offloading a specific task, such as rendering as the modules related to rendering are rarely independent.

The HMD is responsible for sending rotation/translation and events as well as performing the decoding of the rendered image before being displayed on the HMD. The computation node in the edge minicloud, also characterized as Local Service (LS) supports all related-processing from the MAGES SDK and the Unity game engine, also storing the VR scene, data assets and avatars. Multiple instances of LS can be instantiated on the same node to support streaming to multiple HMDs. Aiming also to exploit the benefit of relay severs to support multicasting, dynamic host migration and game state continuity when multiple users collaborate under the same session in the same virtual environment, the ACCORDION platform selects the appropriate resource to deploy the service based on the user’s locations footprints. Additional third-party software is exploited to support the re-design of the application prototype. These are:

WebRTC: Cross-platform framework that enables real-time communication (RTC) for mobile devices and browsers. Establishment of the communication of the participants is left up to the user of the framework, via a signaling server. The implementation of the WebRTC protocol by the Unity team is exploited that supports efficient streaming of rendition results as video playback to recipients, as well as audio processing results and input (via a custom data stream).

Two indicative scenarios are presented below:

Start application, where the user starts the application from the HMD, it communicates to the event bus the launch command to the ACCORDION platform and the application image is deployed on the Local Service (LS). The application exploits the open-source cross-platform Render Streaming Unity package for streaming between end-points, using WebRTC. This protocol relies on a signaling solution involving a third-party server in addition to the two peers trying to connect to each other.

The application can then stream video output (of the actual application view) to the headset, while receiving the user’s input stream itself (controller positions, button presses, etc.), using the WebRTC protocol. This enables low-end VR headsets to execute a high-quality experience.

Create session, the user can either play the operation by themselves or collaborate with others; for the latter, the user accesses the interface for session list on the HMD and requests through the ACCORDION platform the Relay server address. The ACCORDION takes care of the necessary deployment steps of the Photon relay server instance on the available minicloud resource selected by the platform. Information is sent back to the LS and when connection is directly established with the relay server instance the user retrieves the list of active sessions.  The user can join any session hosted on that server (by other users), or host a new session themselves. 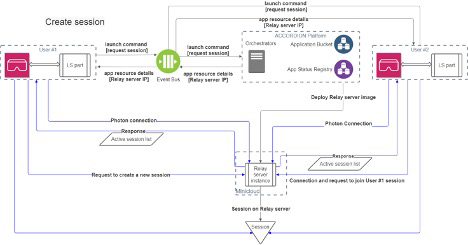 A pre comercial of the @PlexusTech_ Augmented Reality🕹️game has been developed and is now ready. This new version speeds up the initiation of the game by simplifying the steps to set the user´s position 📍
#AR #PlexusTEch #Accordion

Accordion Partner @PlexusTech_ is preparing for the integration meeting in #Barcelona in June. Here the integration of the use cases will be tested within the ACCORDION PLATFORM. We are looking forward to meet all the partners and progress with the integration.
#h2020

#HPE has completed the testing of the #VIM #Gateway component, and of the integrated end-to-end #Minicloud installation procedure, on four different physical testbeds. Now ready to move forward towards federated-level deployments.

This website uses cookies to improve your experience while you navigate through the website. Out of these, the cookies that are categorized as necessary are stored on your browser as they are essential for the working of basic functionalities of the website. We also use third-party cookies that help us analyze and understand how you use this website. These cookies will be stored in your browser only with your consent. You also have the option to opt-out of these cookies. But opting out of some of these cookies may affect your browsing experience.
Necessary Always Enabled
Necessary cookies are absolutely essential for the website to function properly. This category only includes cookies that ensures basic functionalities and security features of the website. These cookies do not store any personal information.
Non-necessary
Any cookies that may not be particularly necessary for the website to function and is used specifically to collect user personal data via analytics, ads, other embedded contents are termed as non-necessary cookies. It is mandatory to procure user consent prior to running these cookies on your website.
SAVE & ACCEPT